Community: The Structure of Belonging by Peter Block

I’ve always liked Peter Block’s statement, “To change the organization, change the conversation.” Creating organizational change is largely about organizing the right conversations between the right people—that’s how relationships and ways of working together are altered. Deepening that notion, I was at a dinner with Peter at a friend’s house the other night, and I got a new insight into what Peter really means.

Peter was careful to distinguish that his change approach applies when “you want tomorrow to be distinctly different than today.” In other words, it is not the approach for when you think things are going well and just want to improve them. Rather, Peter’s advice is directed toward radical change.

His approach focuses on changing the conditions of the conversation. In particular, he stresses the importance of the arrangement of the physical space and of organizing people in small groups that will encourage more intimate connections than are typically created in standard business practice. 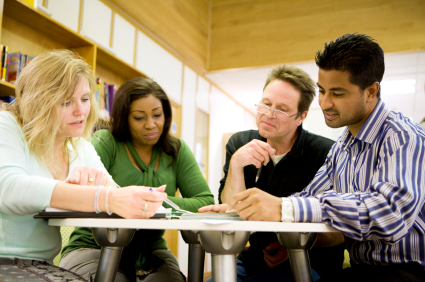 One my insights from the evening was that, although Peter often expresses a general disdain for training, performance reviews, and 360-degree feedback, he’s not suggesting that we convince others to drop those methods. Instead, where possible, he says we should architect small, intimate gatherings that will enable people to relate to each other more authentically. From these, innovation and new insights will emerge.

Peter has for some time also offered Six Conversations that can be used to develop the right conditions for authentic conversation. These conversations, detailed in a pdf on his website, are

I’ve met with Peter several times, and I’m always struck by the similarities between his view and that of my mentor and dissertation chair, the late Dr. Bela Banathy. Dr. Banathy was also strong advocate for creating dialogue groups and transcending the current system by focusing on an ideal future state. Like Peter Block, Dr. Banathy believed that focusing on the current problems only led to more of the same.

There are strong parallels between the notions of participatory systems design and the conditions for forming community that Peter Block discusses. In each, we seek to unleash the “expert” that is in each of us and bring it together to form a new and mutually inspiring vision of the future. Once the community is formed, and only then, it has the potential for engaging in a design conversation that works out how we will organize our human systems for a better future.