When organizational change initiatives are first initiated, they are often vague and uncertain. Sometimes those who desire the change underestimate the effort that will be required; other times, they over estimate it. I use two questions to initially frame and qualify the proposed change.

The number of people affected gives a indication of the scale of the project. That is, projects impacting a high number of people, more than 30 or so, require a lot more structure for communications, training, and employee engagement. This type of structure requires a team to organize and orchestrate it. Conversely, when only a small number of people are affected, roughly less than 30, the group can meet together in a single room and discuss the changes. Additionally, with a group that small, the initiators of the change can talk personally to everyone who is affected.

The second question explores the expected reaction of the affected population, or impact. Although this is a subjective estimation at the start of an initiative, it gives an indication what sort of change efforts will be needed. By combining the response for the size of the affected population with the anticipated degree of impact, the proposed change effort can be categorized into a 2×2 grid as shown below. The boxes give examples of the type of activities that will be required for that category of change. 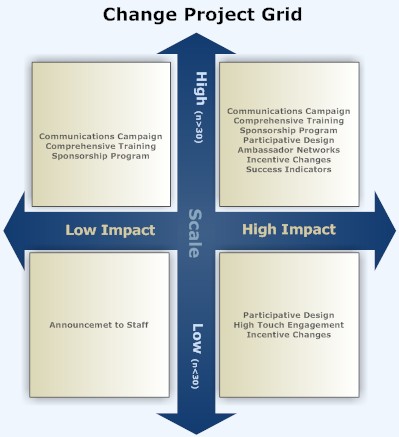 Note that the items in the boxes are provided to illustrate the changes in scope by category , not to provide a comprehensive list. The implications of the categorization are further explained below.