I believe that change agent networks are an important tool for change in human networks and that is one tool where the Obama campaign provided a stellar example of how it is done. The Obama campaign has employed innovative, web 2.0 enhanced methods mixed with tried-and-true community organizing tactics to supercharge their ground effort. This accomplishment has been downplayed by the campaign, reportedly due to fear of drawing parallels with Howard Dean, but change practitioners will recognize the methods as similar to what we often call an “ambassador network” or “a change agent network” in organizational systems change. According to Rolling Stone,

Over the past year, the Obama campaign has quietly worked to integrate the online technologies that fueled the rise of Howard Dean—as well as social-networking and video tools that didn’t even exist in 2004—with the kind of neighbor-to-neighbor movement-building that Obama learned as a young organizer on the streets of Chicago. “That’s the magic of what they’ve done,” says Simon Rosenberg, president of the Democratic think tank NDN. “They’ve married the incredibly powerful online community they built with real on-the-ground field operations. We’ve never seen anything like this before in American political history.”

Here are some of the highlights:

1. Early on, the Obama campaign trained over 7,000 people to be community organizers. According to the campaign’s field director, Temo Figueroa, “We decided that we didn’t want to train volunteers…We want to train organizers — folks who can fend for themselves.” To get this started, Figueroa, and campaign manager Steve Hildebrand, held an intensive, 4-day event called Camp Obama. Master organizers and Harvard professors were brought in to train some of Obama’s most dedicated supporters in the best practices of community organizing.

2. Obama enabled his organizers to have freedom to operate on their own, and they did.

Before long, the campaign had transformed hundreds of thousands of online donors into street-level activists. “Obama didn’t just take their money,” says Donna Brazile, Al Gore’s campaign manager in 2000. “He gave them seats at the table and allowed them to become players.” This opened the door for much greater participation and and sense of ownership in the campaign.

3. Working with the founder of Facebook, the Obama campaign created a website where supporters can have their own profile and connect to other supporters. This personalized portal provides many different resources for the active supporter.

The website, my.barackobma.com, offers news about the candidate, a personal blog, links to action supporters can take, connections to fellow supporters, and a directory of events in the local area. It also provides feedback on the the supporter’s own activities, such as how many events attended, how many hosted, and how much money raised. This presents a powerful, personalized view for people who want to organize support for Senator Obama. According to Joe Trippi,

“They have taken the bottom-up campaign and absolutely perfected it,” says Joe Trippi, who masterminded Dean’s Internet campaign in 2004. “It’s light-years ahead of where we were four years ago. They’ll have 100,000 people in a state who have signed up on their Web site and put in their zip code. Now, paid organizers can get in touch with people at the precinct level and help them build the organization bottom up. That’s never happened before. It never was possible before.” 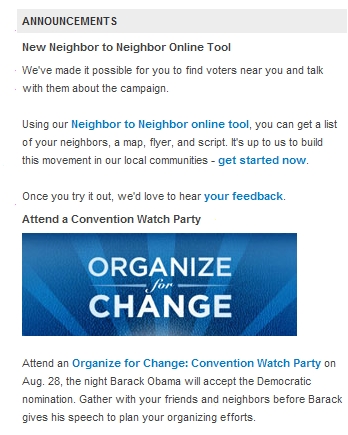 4. The Obama campaign vigorously collects email addresses and supporter profiles. For example, events are used not only to draw out and energize voters, but to collect names, cell phone numbers, and email addresses. These names go into a database of people who can be contacted and mobilized for various efforts, from fund raising to letter writing. According to CNN:

The technique has already been used to counter potentially unfavorable publicity about Obama. A text message sent to his supporters directed hundreds of phone calls to a Chicago radio show where host Stanley Kurtz, a conservative writer, was discussing possible ties between Obama and Bill Ayers.

I noticed in a blog post by Jason Szep today that talked about Obama supporters showing up to disrupt a McCain speech, and I would kind of suspect it was an example of Obama supporters being able to “swarm” an event by calling together their people on short notice.

Similarly, during last night of the Democratic National Convention, Team Obama not only held a nationally televised speech but use the opportunity to organize thousands more supporters. “Doors opened at 1 p.m., hours before the speech, to allow the campaign to hold workshops on how to use text-messaging and the Internet to recruit friends and relatives as supporters.” 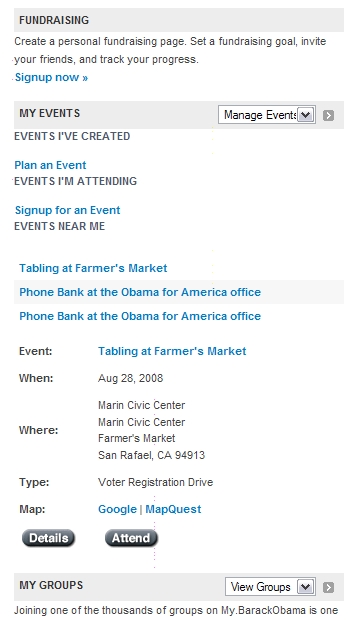 In my opinion, what has made a lot of this come together has been Senator Obama’s sincere belief in participative democracy and bottom-up change. It would have been all too easy to make different decisions along the way.

According to David Axelrod, the campaign’s chief strategist, the bottom-up ethos of the campaign comes straight from the top. “When we started this race, Barack told us that he wanted the campaign to be a vehicle for involving people and giving them a stake in the kind of organizing he believed in,” Axelrod says. “He is still the same guy who came to Chicago as a community organizer twenty-three years ago. The idea that we can organize together and improve our country. I mean, he really believes that.”