By the time you were five, your mother had may have already taught you two key concepts about influencing change, without you even realizing it.

Hopefully, your parents taught you to always say “please,” for example when asking for the salt at the dinner table. While this may seem at first glance to be a mere social nicety, making it a practice has real value.

In the mid 1970s, researchers James Pennebaker and Deborah Sanders conducted a study where they posted two similar but slightly different signs on college bathroom walls. One sign read “Do not write on these walls under any circumstances,” and the other sign read “Please don’t write on these walls.” A couple of weeks later, the walls without the “please” had far more graffiti on them.

So, that split second of extra etiquette might go a long way.

Because I Said So

How often did your Mom justify her position by saying “Because I told you so”? On the surface it seems like the power of this statement rests in the power of your mother, but it turns out that the power might be in part conveyed by the word “because.” 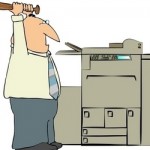 Studies have shown that using “because” in a request increases the percentage of compliance. For example, behavioral scientist Ellen Langer and her colleagues tested this by conducting as study based on requests at a copy machine. In the first part, Langer had a stranger  approach someone waiting in line to use a photocopier and simply ask, “Excuse me, I have five pages.  May I use the Xerox machine?”  In this case, 60% of the people were willing to agree to allow the stranger to go ahead of them.  In the second part,  the stranger included a reason with the request, asking “May I use the Xerox machine, because I’m in a rush?” Almost everyone (94%) complied.

Now, that may seem obvious enough, in that the second study offered a reason, which would logically be more convincing. But, in a shocking result, in a third run  of the study, the requester offered a largely meaningless reason, asking “May I use the Xerox machine, because I have to make copies?”

The rate of compliance was 93%.

So please pay attention to this because I said so!